These drifters are used mostly offshore in order to monitor the current at sea surface for oceanographic studies and also the oil spill trajectories. The drifters can be fitted with holey-sock drogue and are, by this way, linked to a particular mass of water. The drag ratio between surface buoy and the drogue validates the good function of current follower. If no drogue is mounted, the drifter is affected by the surface current.

The SC 40 buoy is a sphere of 400 mm diameter, molded in plastic at high pressure. The SC40 is with low radar echo in order to reduce the risk to be picked up by fishermen and is fitted with lashing rings. nke Instrumentation proposes 3 models: 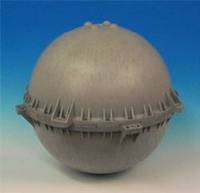 Measurement of Dissolved PCO2 in Seawater

Atmospheric CO2 is one of the elements responsible for the greenhouse effect on Earth. The way its concentration evolves has significant consequences on the climate of our planet. Oceans are known to act as both CO2 sinks and sources, and for the essential, though badly quantified, role they play in the evolution of atmospheric CO2. It is critical to better understand and characterise the gas exchange process between the atmosphere and the ocean. The concentration in atmospheric CO2 is relatively well known, and that of the ocean must be accurately measured.

Given the great space and time variability of dissolved CO2 at the surface of the ocean, an experimental approach aimed at acquiring series of measurements can be adopted using drifting platforms, such as the CARIOCA buoy, in order to complement the data acquired with ships and anchored buoys.

CARIOCA is an automated drifting buoy that measures the partial pressure of dissolved CO2 in seawater in order to quantify air/ocean exchanges. pCO2 is measured in liquid phase by colorimetry on a reagent using a 3-wavelength spectrophotometer with a 4 µatm accuracy.

The buoy is autonomous, data are sent via the ARGOS satellite system, which also controls the positioning. The buoy's autonomy is one year based on an hourly measurement rate.

Measuring campaigns have been carried out in the Mediterranean, Greenland Sea, Equatorial Pacific and the Antarctic. The CARIOCA project is part of the EUREKA EU 819 programme.